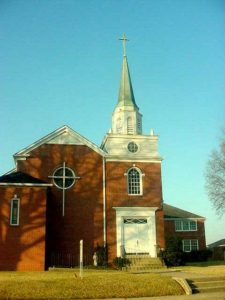 To have a clear vision of the future of FUMC Stanley we must look to our past, which covers the period 1815 to present.
In the early days of Methodism in North Carolina (1784-mid 1800’s), “Circuit Preachers”, known in the Methodist Episcopal Church as “Traveling Clergy”, spread the word to rural and frontier areas of our state.  As they traveled from farm to village, they spread the Word of God and attended to the needs of the people.   Through harsh conditions and traveling only with what they could fit in their saddlebags they covered hundreds of miles in several months. Their circuits covered an area 200-250 miles in circumference and they were expected to cover that in 4-6 weeks.

As a result of these early circuit preachers, First United Methodist Church -Stanley dates back to 1815, 200 years ago. That was when the Providence Church was formed near Dutchman’s Creek, off Sandy Ford Road, between Stanley and Mt.Holly.
Providence Church was on the Lincoln Circuit. As far as can be determined FUMC Stanley is the third oldest Methodist church established in the area.  It started as a “brush arbor”.  A brush arbor was merely a structure with poles for support of a roof of branches, which offered some protection from elements for the preacher and congregation.  Crude benches might have also been built.  Later a “meeting house” was built at Providence.  Popular camp meetings were held there for years. Some families who attended were Morris, Derr, Abernethy, Rankin, and Rutledge.

One of the charter members of Providence Methodist and later at Stanley Creek was Richard Rankin, who at the age of 15, in 1819, became the first Sunday School Superintendent.  He also served as a Steward for many years. He remained an active member until his death in 1900 at the age of 95.

A very popular camp meeting was held there for many years. There is a deed, dated October 8, 1859, from the trustees of the Stanley Creek Campground of Methodist Episcopal Church” granting Valentine Derr (Relative of Donna Bumgarner, Kitty Saunders, and Carolyn Huskins) Lot # 27 –“for camping or tenting while attending Divine Worship”. Gideon Abernethy (Great grandfather of Carolyn Huskins and Kitty Saunders) referenced a big camp meeting at Stanley Creek Methodist in a letter to his brother, July 15, 1868.  The services held there were very popular with Stanley Creek residents.

About 1880 the Stanley Circuit was created, and the church had a resident pastor for the first time.  About this time the church leaders began looking for a new place.  The trustees began to buy land closer to the railroad in Brevard Station, and they began to sell the camp meeting property.  More land was sold in order to build a new church.   The new church was built in 1891-92 on East College Street near where the Stanley Community Building sits. The church was a small one-room wood frame building.   Later the congregation added a room, which was used as a Sunday School room for the young adults.  A small room, attached to the church, was a favorite gathering place for the youth.  It was their Epworth League room and was probably the most popular gathering place at the church. Doris Chapman remembers a steeple on the church in the center of the front.  Ray Hovis and Bob Cloninger also remember a Boy Scout building near the church.
About 1900 a new era in education began in North Carolina.  The Methodist Conference decided to establish some academies in our district (then Shelby District).  Stanley was selected as a site for one.  In 1898, Stanley Methodists, W.D.Thompson and E.L.Pegram, gave the conference a piece of land in front of the current Kiser School for that purpose and a school was built there.  Prof. Steve Stewart was asked to run the school.  Miss Alice Daniel was also to teach there.  By November of the first year a 3rd teacher was added- and he had to teach in the “cloak” room!  The school was very successful and continued until a public school was planned.

The church remained on East College Street until it was able to secure a 3-acre lot on North Main Street where we are now.   Reverend A. Layton Rayle was very determined to build a new church, money was raised, land was purchased, and a new building was built 1941-42.  Rev. Rayle died April 9, 1942, and his funeral was the first held in the new church. We became a station church in 1945.

Several parsonages have been the home of our pastors over the years. Conditions must not have been ideal- an unnamed pastor took one look at one parsonage and requested to be sent back to Japan as a missionary.  Other parsonages have hopefully been a better fit. There was a parsonage on the corner of South Main and Church St. when our church was on College St.  In 1942, the parsonage was a white two-story house located adjacent to the new church.  In 1955, under Pastor G.F. Houck, a new modern brick parsonage was built, and completed that fall. It now houses the Boy Scouts and storage for the food pantry.  In the 1990’s we purchased our current parsonage in the Southfork subdivision.

Remodeling of the Sanctuary and building of the Education building was begun in 1959, under Rev. J. Leonard Rayle, and completed in 1960. At this time the steeple was moved from the side to the front of the church.  As the church grew and activities increased, the Activity Building was built in 1970-71. Rev. J.C.Grose was pastor. In 1995-96, under Rev. Mike Tolbert, we were able to purchase 93 acres on Hickory Grove road for future development.

In 2007-2008 we became a church with two campuses when a new Family Life Center was built on the Hickory Grove property.  On the property we also have a playground, walking track, hiking trails, and a Prayer Chapel.   We named this area Common Ground, a place for all of our neighbors.  We started holding an outdoor worship gathering on Sunday morning that has grown into an active part of our church.  Many other church and community activities are held on Common Ground and in the Family Life Center weekly.

As in days of old, our church continues to grow both spiritually and physically.

Nuturing the childred through scouting 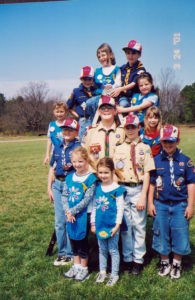 In 1990’s our church saw the need for growth and purchased 90+ acres on Old Hickory Grove Rd. We immediately set up a walking track for the community and they responded. We open the land to our scouts as well as district scouting events. We since have added walking trails, playgrounds, outdoor basketball. To our track, we have added a modest chapel that has proven to be a refuge  for those in need.

A decade later we added a Family Life Center on the 90+ acres which offers open basketball, our newest ministry Faithfully Fit. and numerous other events. 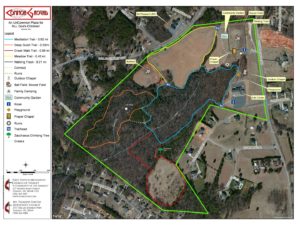 As we continued to offer ourselves to the community, the community responded again as we named the combined property “Common Ground” for all of God’s children. We have a new faith community meeting on Sunday mornings at 9:00 that meets outdoors in the summer and in the FLC in the winter. This faith community is  un-hindered by differences in personal walks with Christ. Its diversity is it strength. 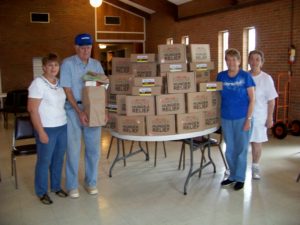 Type text here.We are also serving our community by feeding the hungry. We faithfully support the Heffer Project (small desription), and World Hunger on a global scale as well as provide meals for children in our local schools and provide a bags of groceries on Tuesdays for those in need. We currently have given over 4000 bags and going strong. 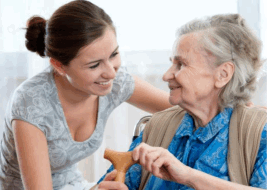 This is just a snap shot of who we are.  We would love for you to visit more of our diverse ministries here in Stanley